Match the following by clicking on the definition, then dragging and dropping it beside the correct vocabulary word. 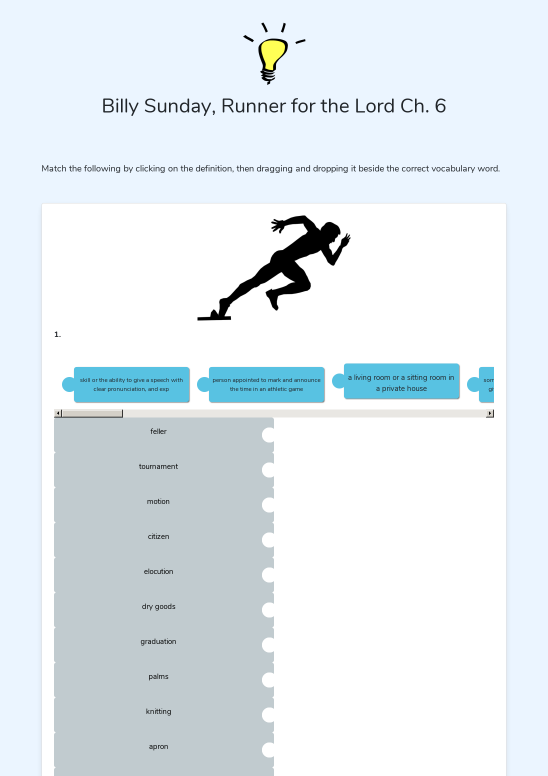 
feller → a very informal way of saying fellow—a general term for a man or boy, tournament → (in a sport or game) a series of contests between several competitors, who compete for an overall prize, motion → movement of head, hand, or body part to express a feeling or idea , citizen → an inhabitant of a particular town or city, elocution → skill or the ability to give a speech with clear pronunciation, and exp, dry goods → fabric, thread, clothing, tobacco, tea, sugar, coffee, or other type items that do not contain liquid; items sold in mercantile shops (not groceries), graduation → a ceremony at which you are given a diploma or degree to show the completion of a course of study at a high school or college, palms → the inner part of the hand from the wrist to the base of the fingers, knitting → to form by interlacing yarn or thread in a series of connected loops , apron → a protective or decorative garment worn over the front of one's clothes , parlor → a living room or a sitting room in a private house, announcement → something that someone says officially, giving information about something, captain → a person who is at the head of or in authority over others, countryside → land which is away from towns and cities, uniform → a certain outfit that members of a group must wear, timekeeper → person appointed to mark and announce the time in an athletic game , dash → run or move very quickly or hastily, a quick run, funeral → the ceremonies honoring a dead person, typically involving burial, batter → one that strikes or hits a ball with a bat, greased lightening → old fashioned word describing something moving incredibly fast