Match your vocabulary words and definitions by clicking on the definition and dropping it beside the correct word. 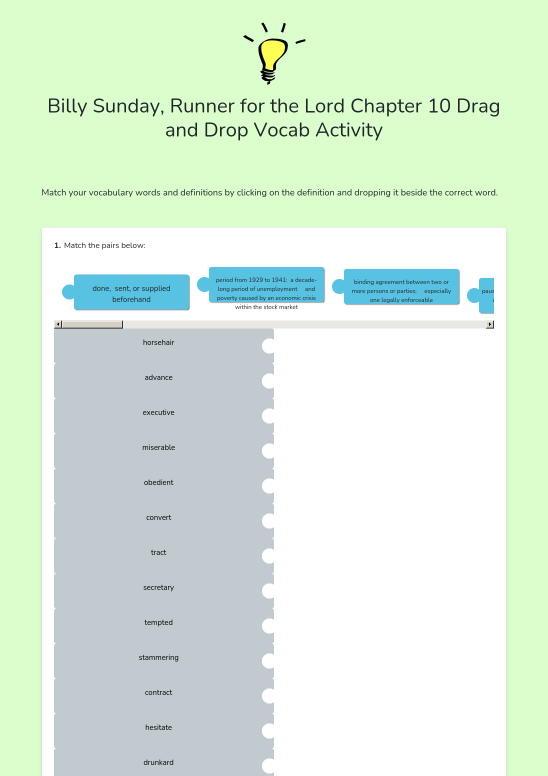 Match the pairs below:
horsehair → hair from the mane or tail of a horse, typically used in furniture for padding, advance → done, sent, or supplied beforehand, executive → a person in a supervisory or administrative position, miserable → state of distress or unhappiness; condition of misery, obedient → complying or willing to comply with orders or requests; submissive to another’s will, convert → person who has been persuaded to change their religious faith or other beliefs, tract → a short piece of writing, especially on a religious or political subject, that is intended to influence other people's opinions, secretary → a person employed by an individual or in an office to assist with correspondence, keep records, make appointments, and carry out similar tasks, tempted → attract; allure; to entice or allure to do something often regarded as unwise, wrong, or immoral, stammering → speak with sudden involuntary pauses and a tendency to repeat the initial letters of words, contract → binding agreement between two or more persons or parties; especially one legally enforceable, hesitate → pause before saying or doing something, especially through uncertainty, drunkard → a person who is habitually drunk, Great Depression → period from 1929 to 1941: a decade-long period of unemployment and poverty caused by an economic crisis within the stock market, disapproval → a feeling of not approving someone or something, released → allow or enable to escape from confinement; set free, donations → the making of a gift especially to a charity or public institution , ashamed → feeling shame; distressed or embarrassed by feelings of guilt, foolishness, or disgrace, nervous → worried and anxious; slightly afraid; easily excited; jumpy, distinguished → it implies good behavior, dressing very well, and having an excellent reputation