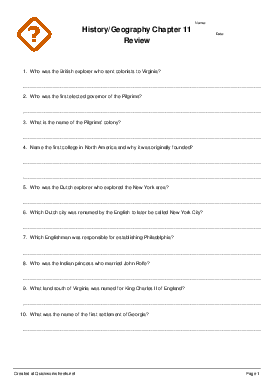 Who was the British explorer who sent colonists to Virginia? Sir Walter Raleigh Who was the first elected governor of the Pilgrims? John Carver What is the name of the Pilgrims' colony? Plymouth Name the first college in North America and why it was originally founded? Harvard; to train young men for the ministry Who was the Dutch explorer who explored the New York area? Henry Hudson Which Dutch city was renamed by the English to later be called New York City? New Amsterdam Which Englishman was responsible for establishing Philadelphia? William Penn Who was the Indian princess who married John Rolfe? Pocahontas What land south of Virginia was named for King Charles II of England? Carolina What was the name of the first settlement of Georgia? Savannah